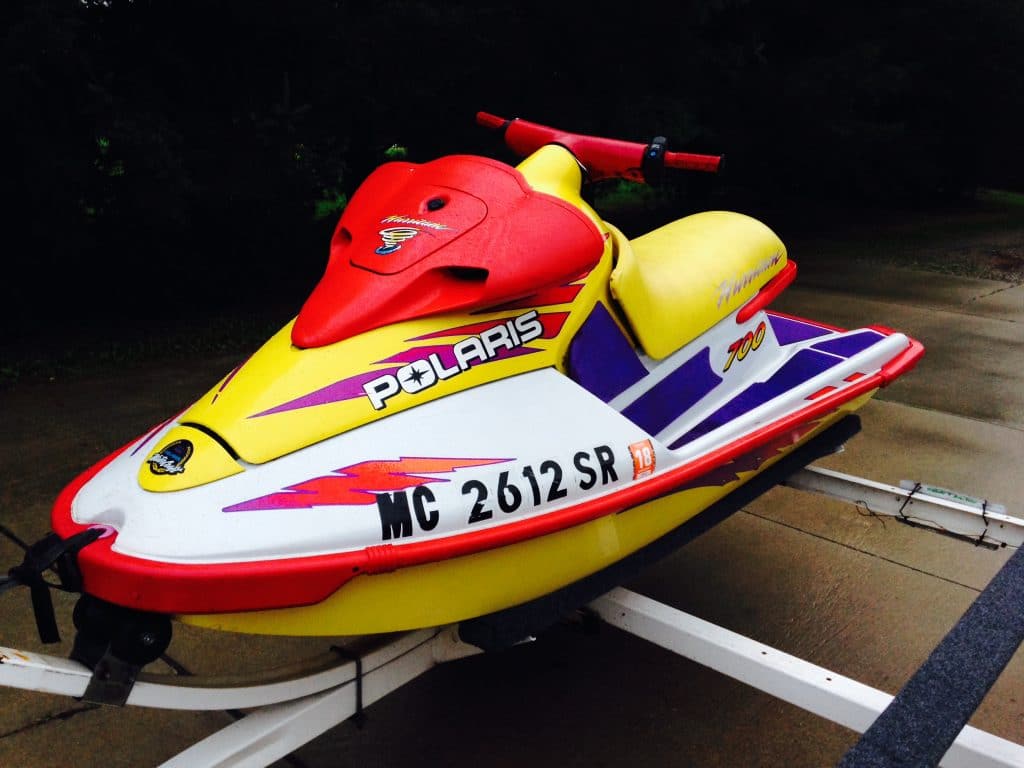 Up until the early 2000’s, a Polaris jet ski was a fairly common sight on the water. They were one of the top jet ski manufacturers, and made some very admirable watercraft. By no means were they ever the most popular jet ski, but there were definitely around. Sadly, their already small market share shrank to nothing when they ceased production in late 2004.

Well, a lot of those questions depend on who is being asked.

Polaris is a well known action sports manufacturer that started back in 1954. They’re most popular for creating the first ever snow mobile, but have also made motorcycles, atvs, jet skis, and everything in between.

Models like the Polaris 750 jet ski, as well as several variations, were fan favorites early on. In the beginning, their models used imported Fuji engines that performed excellently for the time. However, EPA standards as well as production costs led them to create their own domestic engine by the late 90’s.

Related: Is it worth it to buy a Honda jet ski?

Perhaps the biggest problem Polaris watercraft had been how late they were to the game. This is the same challenge other now defunct manufacturers had. By the time Polaris jet skis entered the market, Sea Doo, Yamaha, and Kawasaki had all been making pwc for decades. Attempting to carve out a share of the market so late proved to be challenging, even when the market was at its peak.

Another major contributing factor to the failure of the Polaris jet ski program was their actual manufacturing. From the very beginning they outsourced their major parts, which wasn’t very cost effective in the long run. By the time their production costs and tightening EPA regulations forced them into creating a domestic engine, they were already on their last leg.

One of the less talked about problems Polaris had been the overall market that they were in. There was a pwc boom that peaked somewhere in the mid 90’s, but shortly after dropped dramatically. The popularity of personal watercraft in the early and mid 90’s is arguably what kept Polaris afloat for so long. After the popularity subsided, their market share was simply too small.

Despite the challenges they faced, Polaris pushed on through into the early 2000’s. Unfortunately, an accident in 2001 led to an extensive lawsuit that ultimately led Polaris to cease production of their watercraft. After struggling through the challenges of a booming market, it simply wasn’t worth it to continue on after things slowed down.

Most people who know about why Polaris stopped making jet skis get stuck on the sales and the lawsuit. While both of those were contributing factors, there were many other difficult tasks that Polaris faced that led them to shutting their doors.

Related: Is it worth it to buy a Tigershark jet ski?

Is it still worth it to buy a Polaris jet ski?

For obvious reasons, a Polaris jet ski is one of the most affordable models available on the market. They’re aged, used, and no longer in production. This allows potential buyers to pick up an entry level watercraft for a steal. A lot of people don’t care about age, branding, or bells and whistles. They simply want a jet ski.

Some enthusiasts will argue that a Polaris jet ski is an excellent option, while others would avoid it like the plague. Ultimately it’s up to the individual to decide, but these are some of the pros and cons worth considering.

In the end, it’s up to people to decide for themselves whether or not it’s worth it to buy a Polaris jet ski. There are definitely some great models still out there, as long as someone’s willing to put in the time and effort required.

Does Polaris still make jet skis? No. That being said, there are rumors that they may return to the pwc market now that demand has begun to rise again. Oddly enough, these rumors have surfaced around the same time as speculation that Honda will be reentering the market as well.

Sadly, as much as fans would love a new Polaris jet ski model, it more than likely wont happen. These rumors are probably floating around because of the popularity of the current market. Even though many people would love for them to be true, there hasn’t been any official news on a possible resurgence.

For Polaris, a reentrance into the pwc industry would essentially mean starting from scratch. Considering the very sizable market share that Sea Doo, Yamaha, and Kawasaki own, it just doesn’t seem like a very likely scenario.