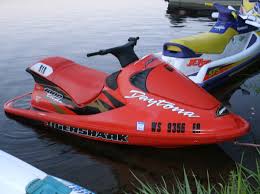 For most of the 90’s, seeing a Tigershark jet ski on the water was a pretty common occurrence. They were unlike any other waverunner out there, and best of all they were affordable. Fast forward 20 years and it’s almost impossible to find one. Honestly, most people probably haven’t even heard of them.

A lot of people who find a Tigershark jet ski on the used market don’t know if it’s a good buy or not. All they see is a funny looking jet ski with a weird name, and a cheap price. It’s pretty difficult to find out anything else.

For some reason there isn’t a lot of real information on Tigershark jet skis. It’s kind of like a company came out of nowhere, made thousands of jet ski’s for almost a decade, and then disappeared. Actually, that’s almost exactly what happened.

Before you buy a Tigershark jet ski, it’s good to know about them and why they’re no longer around.

For starters, Tigershark jet skis are just one of many action sports vehicles made by a company called Arctic Cat. Although they’re most famous for their snowmobiles, Arctic Cat has dabbled in a lot of other markets.

At one point or another they’ve made jet skis, snow blowers, generators, mini bikes, and two-wheel drive vehicles. Currently they stick to snowmobiles, ATV’s, and side-by-sides, but they’ve definitely experimented with their product line. 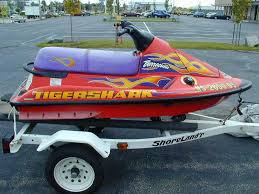 From 1993-1999, Arctic Cat made Tigershark jet skis. Those years had several ups and downs, with limited success overall.

What attracted people to a Tigershark jet ski back then is what still attracts them today. Most of their models were small and agile, and came with an affordable price tag.

Unfortunately, what deterred people back then is what still deters them today. Often times Tigershark jet skis can come with much more maintenance issues than other models. By no means were they considered the most reliable, and that’s a reputation they held until the late 90’s.

Around 1997, Tigershark began to make some really good strides in the right direction. In an attempt to paint a new image for themselves, they made a lot of changes in the company. Models were no longer named after famous beaches, and their overall build was much better.

Sadly they started to figure things out a little too late. Even the improved models of the late 90’s were outperformed by competitors, and in 1999 they stopped production. 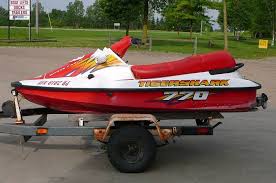 For the most part they went out of business due to lack of sales, but there are also rumors of a lawsuit brought on by Yamaha. Apparently Tigershark infringed on some of Yamaha’s patents, and the lawsuit was a determining factor in their decision to shut down.

It’s really unfortunate that they ended when they did, because it looked like the company was finally doing some good things in the industry.

The models made from 1997-1999 were fan favorites, and some people still ride them today. More often than not, a Tigershark jet ski that’s still on the water is going to be one of the later models.

Related: Is it worth it to buy a Honda jet ski?

Is it worth it to buy a Tigershark jet ski?

Similar to Hondas, Tigershark jet skis aren’t going to be the most reliable. Even in their prime years of 97-99 Tigersharks had plenty of issues. Of course this varies depending on model, year, and owner history, but it generally holds true.

Reliability really becomes a problem when hunting for parts. All used jet skis come with problems, but when the company’s been out of business for 20 years parts can be extra scarce. It’s a lot hard to fix a jet ski when they don’t even make the replacement part anymore.

There are definitely a lot of cons to buying a Tigershark jet ski, but there are a few pro’s as well. They can be cool projects to work on, and they’re usually cheap to buy.

If you can somehow find a good running Tigershark, they’re great to ride. A Tigershark jet ski from the late 90’s can hit between 55-65 mph, and they ride much different than modern models. The small, lightweight bodies can be really fun, so long as they work properly.

Do you think it’s worth it to buy a Tigershark jet ski? Tell us why or why not in the comments section below.