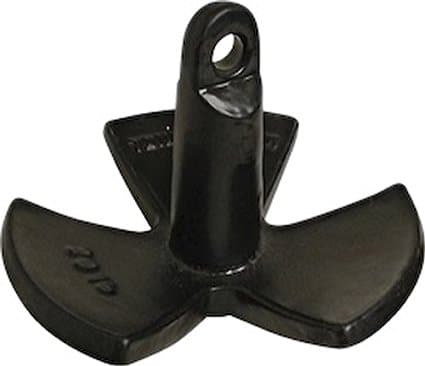 A good pontoon anchor is one of the best investments any boater can make. After all, keeping a boat from floating away is a pretty important task.

Although pontoon anchors come in just about every shape and size imaginable, not all of them have the same quality. There are a ton of cheap options out there that can barely make it through one season. Rather than getting a new anchor every season, it’s way better to invest in one that will last long term.

Believe it or not, pontoon boat anchor systems need maintenance and some tlc from time to time. These are a few maintenance tips that can help any pontoon anchor last longer, and function better.

A box anchor is one of the most common pontoon anchor options. They get their name from their square shaped design that forms the frame of a box. Typically there are flukes sticking on the sides of a box anchor, allowing it to catch traction on lake floors.

Box anchors are favored by many for their simple design and easy use. Most box anchors will set within the first 1-2 feet of their landing. This type of anchor system works best in muddy lake and river beds, but is versatile enough to function well in most other conditions.

Often times box anchors can cost more than other anchor types. This is partly due to their design, but also because they are often very heavy. Even with a high price tag, box anchors are well worth it. Smaller, cheaper anchors simply cannot handle larger vessels such as pontoons. 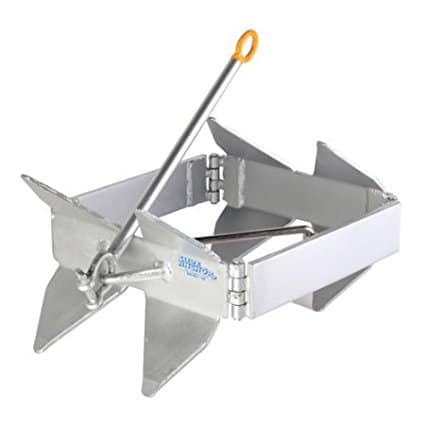 Slide Anchor makes a really high quality box anchor for pontoon boats. It’s able to fold down, minimizing the amount of storage space it occupies. The entire frame is made from a durable stainless steel that can handle plenty of abuse.

On the top of the frame is a rod meant for attaching a rope or line to. It’s connected to the frame though a welded link that allows it to pivot and better adjust to any angle needed.

The large version of this anchor weight approximately 25 pounds, and can work on boats as large 40 feet or more.

When most people think of an anchor, typically the image of a fluke anchor comes to mind. These types of anchors can vary in looks and design, but they all share similar traits. Usually a fluke anchor has a center column or rod connecting to a horizontal bottom with flukes on the ends.

Fluke anchors have been used almost as long as boats have, and for good reason. Their design works really well for a large variety of boat types, in plenty of different waterways. They can be some of the best pontoon boat anchors, and many owners use them exclusively.

A fluke anchor can sometimes require a few feet before they catch, but once they do, it’s rare that they’ll budge. 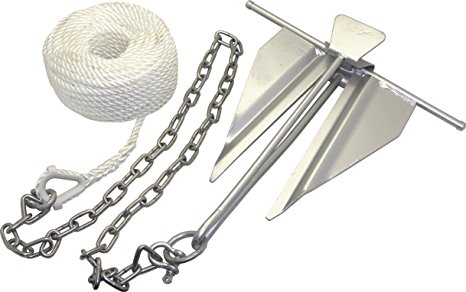 The fluke anchor by Shoreline Marine is a well rounded option in terms of how much is costs compared to its overall quality. This is one of the most affordable pontoon boat anchor systems out there, and it can handle boats up to about 25 feet.

This anchor comes with two 5/16″ drop forged shackles, as well as a 3/8″ x 50′ twisted nylon rope. The twisted nylon works extremely well as pontoon boat anchor rope, and can last for several seasons.

Using this pontoon anchor in rivers and lakes is where it really preforms well. It can handle rocky, sandy, and even muddy terrains. The natural winds and currents do an excellent job at forcing the anchor to lock into place within a few feet of where ever it is dropped. As for ocean use, most vessels should have no problem using this anchor in shallower depths, so long as winds are moderate.

This is by no means the absolute best pontoon boat anchor, but for the price, it provides a tremendous amount of value. There aren’t very many pontoon anchors in the same price range that can perform as well.

Digger style pontoon boat anchors don’t work as well in rocky bottoms as they do in bottoms with mud, sand, or vegetation. Of course they can still be used in rocky bottoms, but larger vessels may have slightly more trouble getting it to set. Ultimately it depends on how large and how loose the rocky terrain is. 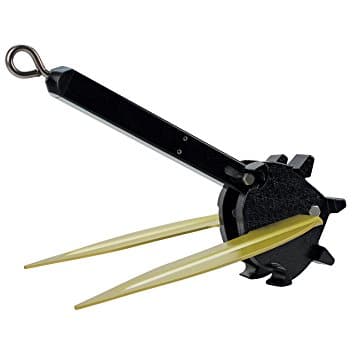 Compared to other pontoon boat anchor systems, the Grip and Go anchor has a pretty unique design. This digger style anchor has adjustable flukes, allowing users to tailor the angle for different conditions.

Although it is rated for boats up to 40 feet, it better suits boats in the 20-35 foot range. Boats larger than 35 feet may find that this anchor doesn’t set as well as other options.

There are tons of different designs for mushroom style anchors, and how well they work varies accordingly. Mushroom style anchors typically have 2-4 flukes that are slightly angled towards a center column. Most mushroom anchors look somewhat like grappling hooks, but much bulkier and heavier.

A mushroom style anchor is perhaps the best pontoon boat anchor for rocky terrains. They’re very well rounded and can handle sand and mud as well, but rocky terrain is where they outshine other styles. Their heavy weight mixed with multiple flukes have no problem digging into almost any terrain imaginable. The only downside to mushroom style anchors is they can be more difficult to pull back up than some other styles.

The Sea Sense river anchor is a great mushroom anchor for pontoon boats. It has 3 solid flukes, and it weighs 30 pounds.

Unfortunately the flukes on this anchor aren’t foldable, but the lack of moving parts makes it much more durable. It’s rated for boats up to 25 feet, but it’s possible that it could handle vessels that are slightly larger.

This anchor has a very simple design, but it’s extremely durable and will definitely keep just about any pontoon from drifting away.

Sand anchors aren’t the most popular style of pontoon anchor, but some people find them to be very useful.

Almost all sand anchors have the same exact design. They usually feature handlebars with a rod that extends a few feet down, with one or two blades at the bottom that allow it to grip.

Most models are really simple to use, and they actually work surprisingly well. By twisting the top handlebars, the rod slowly screws into the sand. Once it’s in the ground, it’s sturdy enough to hold anything from a jet ski to a pontoon.

This is really only an option for shallow waters. If the water is more than a foot or two deep, the anchor simply can’t grip enough to properly hold a boat. The only real purpose of a sand anchor is when a watercraft is anchored near a beach or sandbar. Other than that, it’s better to go with a different style. 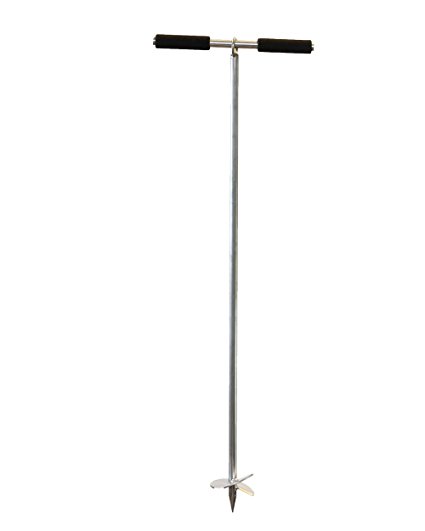 The Sand Shark sand anchor has a loop on the top that allows a handlebar to be threaded through when screwing it into the sand. Once the anchor is in place, the handlebar can be removed and the loop acts as a tie off for a pontoon boat anchor rope to connect to.

These anchors aren’t the most versatile, but they definitely have their place. A lot of people don’t want the hassle of a traditional anchor when they’re just stopping at a sandbar or beach. With a sand anchor, a pontoon can be tied off quick and easy.

How To Anchor a Pontoon Boat Properly

Learning how to properly anchor a boat is an important process that a lot of owners skip over. Most people think it’s intuitive, and never bother to actually learn the right way.

Although it’s possible to get by using an anchor improperly, it’s never too late to learn the correct steps. Other than being more efficient, anchoring the right way is safer as well. On a paddle boat it’s not a big deal to just toss the anchor over the side, but on larger vessels that can be dangerous.

First things first, the location of anchoring needs to be determined. This means figuring out what the water depth is, what the surface type of the floor is, and being aware of any current or wind direction.

This is where the type of anchor really comes into play. Different anchors work better in different situations, so knowing the landscape is important.

Once the location is determined, it’s time to start the anchoring process.

Put the engine in neutral and allow the boat to come to a stop. Be sure that the boat is facing into the current or wind, depending on which one is stronger at the time of anchoring.

After the boat is stopped and facing in the right direction, choose which cleat to tie the anchor rope to. Check that the line isn’t tangled and doesn’t have any knots in it. After the line has been inspected, secure it to the cleat and slowly release it into the water. Never throw or drop an anchor, as this can cause the rope to kink up or snag other objects on board as it falls into the water.

The U.S. Coast Guard recommends that the amount of rope used be 5-7 times the depth of the water plus the distance between the water surface and the point where the anchor is secured.

As the anchor is being released, the wind or current should cause the boat to start drifting backwards. If there is no wind or current, it may be necessary to put the engine in reverse and slowly ease back. This prevents the rope or chain from piling up on top of the anchor once it reaches the bottom.

Once the anchor has reached the bottom, wrap the excess rope around the cleat twice to secure it properly. When the boat starts going backwards, either from winds and current or from putting it in reverse, this will help the anchor set.

After it feels like the rope has some tension, give it a couple of tugs to be sure that it’s set. If it feels locked into place, then it’s good to go.

The last thing to do is look around for visual landmarks to make sure the boat isn’t drifting. Be sure to look around periodically to double check that the landmarks are still nearby. If they are, then congratulations, the boat has been properly anchored.

18+ Must Have Boating Accessories – Things Every Boater Needs