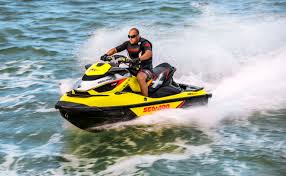 It goes without saying that Sea Doo makes some incredibly fast jet skis, but a lot of people want to know exactly what their top speed is. Sea Doo top speeds tend to vary depending on the model, with the slowest being around 40 mph, and the fastest topping out around 70 mph. Individual top speeds of their different models are compiled in a list below. 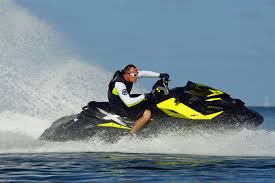 Due to limitations set in the US, stock jet skis are unable to exceed 70 mph. For safety reasons, this is a much needed precaution, but it doesn’t stop people from wanting to go fast. Because of the US laws limiting top speeds, manufacturers have shifted their focus to 0-30 times. So although the tops speeds may not seem too impressive, keep in mind that these jet skis reach their limits in a matter of 4 or 5 seconds. Anyone who has gone that fast on the water can tell you that it’s more than enough speed to get a thrill. Going 0-30 in under 5 seconds is jaw dropping on land, let alone on water.

Sea Doo top speeds, along with 0-30 times vary depending on a lot of factors. Things such as rider weight, fuel tank size, water conditions, and more can all affect speeds. These are all variables that can make a jet ski faster, (or slower) and should definitely be taken into consideration.

People who claim to top 70 mph on their jet ski are more than likely using aftermarket mods, so don’t be alarmed if your top speed doesn’t match theirs.

Below is a mixture of Sea Doo top speeds from 2016 to 2018. Since there is no one source for all current top speeds, it can be difficult to find accurate numbers. Remember that these are approximate numbers. Simple modifications and other variables can make the numbers go up or down.

We welcome anyone to share their personal Sea Doo top speeds in the comments. It’s always interesting to see how different conditions and modifications can affect top speeds.

The Sea Doo Spark is a fan favorite and one of the best starter jet skis in the industry. It’s become so popular that the Sea Doo Spark Trixx has been released as an available upgrade package.

A lot of rental companies tend to use the GTS 130 because they’re pretty well rounded given their price. Although they’re great jet skis, most private buyers would prefer something cheaper or faster. The GTS falls in a weird gap between affordable and exciting.

Regardless, the GTS has still built somewhat of a fan base and a few private buyers still prefer them over other Sea Doo models.

Sea Doo has always made innovative changes to the PWC industry, and one of them was the Wake Pro. As the name suggests, the Sea Doo Wake Pro is made for water sports enthusiasts. It’s the go-to get ski for many wake boarders, but it can be used for just about any other water sport as well.

Although the Wake Pro models are designed for water sports, they can also be ridden as a normal jet ski. The main difference with Wake Pro models is they provide add ons geared towards tow sports.

When it comes down to it, the GTI is like the cool older brother of the GTS. One of the reasons why it’s so popular is that there are more versions of the GTI available than any other model. That way, buyers are able to find the exact model and options that suites their needs.

The GTI models are great starter jet skis, but they’re much more luxurious than most other base models. Overall they provide a smooth, agile, and comfortable ride. The GTI isn’t going to have the best Sea Doo top speed, but it’s a solid model nonetheless.

For any new buyers looking to get into the world of performance jet skis, the GTR 215 is a great way to test the water (pun intended). It’s not the fastest jet ski, but it will definitely throw your hair back. Well, unless you’re wearing a helmet.

The GTX line up is filled with luxury style jet skis that have some performance aspects to them. Not only are these jet skis extremely comfortable to ride, but they’re fast as well.

Most veteran riders appreciate the middle ground the GTX provides between comfort and speed. They aren’t the fastest, or the most luxurious, but for the price tag riders definitely get the best of both worlds.

All of the RXT models are considered to be top of the line watercraft. They’re much more powerful, and expensive, than most other jet skis. If someone races on a Sea Doo, chances are they’re on an RXT.

RXT models are serious performance watercraft and are not designed for beginners. They come with tons of bells and whistles, and more than enough power. Even though the RXT models aren’t recommended for beginners, they can be a blast to own for any experienced rider.

As you may have guessed from the name, the RXP is essentially the RXT’s twin. It’s just as powerful, but it comes with a few differences.

Just like with the RXT models, the RXP class is designed specifically for experienced riders. They’re high performance jet skis and are most popular in closed course racing tournaments. When it comes to Sea Doo top speeds, the RXP is definitely at the top of the leaderboards.

This list will be updated periodically to maintain as accurate information as possible. Again, all of the Sea Doo top speeds listed are approximate numbers. Actual top speeds vary depending on several factors.

Do Jet Skis Have Brakes? How Do They Stop?