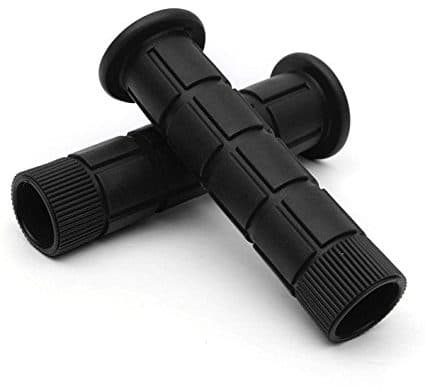 Jet ski handlebar grips are one of those really useful items that never quite get the credit they deserve. They don’t keep an engine running or help a pwc float, but they’re still important nonetheless. After all, imagine how hard it would be to do a half decent doughnut with no grips. Just a few minutes of steering wet handlebars without any grips would be a complete nightmare.

There are plenty of Yamaha, Kawasaki, and even Sea Doo handlebar grips out there, but these are a few of the better choices available.

Before installing a new set of jet ski handlebar grips, the old ones need to first be removed. This is usually an easy process, and can be done in a matter of minutes.

If you don’t care about keeping the old grips, simply use a knife to cut down the side of the grips so they can be removed. Sometimes using a screwdriver or something similar to wedge in between the grips and handlebars makes the cutting process a bit easier. Once the grips are completely cut, peel them off and throw them away. Be extra careful not to gouge the metal handlebars when cutting the grips. Also, be aware of any wires or cables near the handlebars when cutting. A new set of grips might only cost $20, but the same can’t be said for any important cables.

If you want to salvage the old grips, the removal process requires a little more effort. First, try to wiggle the grip off as much as possible by twisting it back and forth. If there’s room, try spraying some lubricant between the grip and the handlebar. Be careful not to get any on the outside of the grip, as that can make it much more difficult to pull off.

Continue to wiggle the grip until it is completely off of the handle bar. Pushing a screwdriver or something similar between the grip and handlebars may help, but be careful not to rip the grip.

After the old grips have been removed, the new grips still need to be installed.

Depending on the type of grips, a glue or spray adhesive may be required to secure them properly. Using a glue or adhesive isn’t always necessary, but a lot of people choose to do it out of precaution.

If you do choose to add some glue when installing grips, Scott handlebar grip glue is one of the better glues out there. It’s designed specifically for motorcycle, atv, bicycle, and jet ski handlebar grips.

Most of the jet ski handlebar grips available are pretty similar, but these are a few of the better options to choose from. 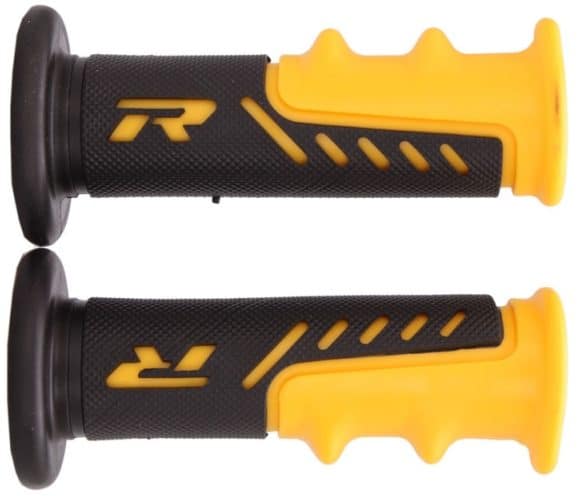 KMT Motorparts grips are a pretty universal option. They’re made to fit jet skis, atvs, and just about every other motorsport vehicle imaginable. As long as the handlebar diameter matches, they work.

Because of their distinct yellow color, these are one of the best options as Seadoo handlebar grips. That being said, they can work just as well work on a Yamaha or a Kawasaki. If the standard yellow doesn’t match your watercraft’s color, there is a grey color option as well.

Each grip has the letter “R” engraved in it. Functionality wise this doesn’t really do much, but anyone with a name starting with “R” would probably appreciate it. The only real allure of these grips are the non-slip finger patterns on the ends.

Overall these grips contour to the hand very well, and they’re a great improvement from most standard jet ski handlebar grips. 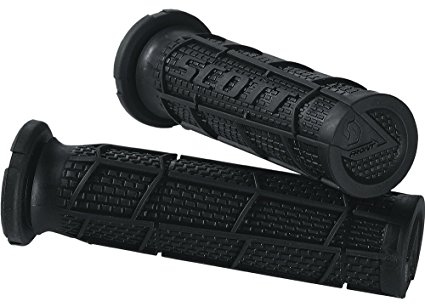 Despite being designed for atvs, the Scott Sports radial grips work extremely well on a jet ski.

They’re made to fit 7/8″ handlebars, so they’re compatible with a lot of pwc models. Aside from being used on a jet ski, people have used these on scooters, street bikes, and everything in between.

These grips have a full waffle design with connecting ribs that provide impressive traction. They’re made with a single density design to reduce vibrations as well as fatigue during longer rides. For under $10, this is a hard to beat option. 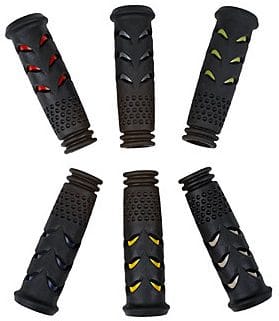 The OEM Seadoo handlebar grips are a huge upgrade from their stock grips. Aside from having a better feel, they’re also much more stylish than stock Seadoo grips.

Although these grips are only meant to be Seadoo handlebar grips, there’s no reason why they couldn’t be used on a different pwc with the same sized handlebars. They don’t have any Seadoo markings, so they could easily blend in on other models. In addition to not having any logos, they also come in a variety of colors so they can be matched with almost any pwc.

These grips are slightly more expensive than some other options, but that’s to be expected considering they’re name brand. 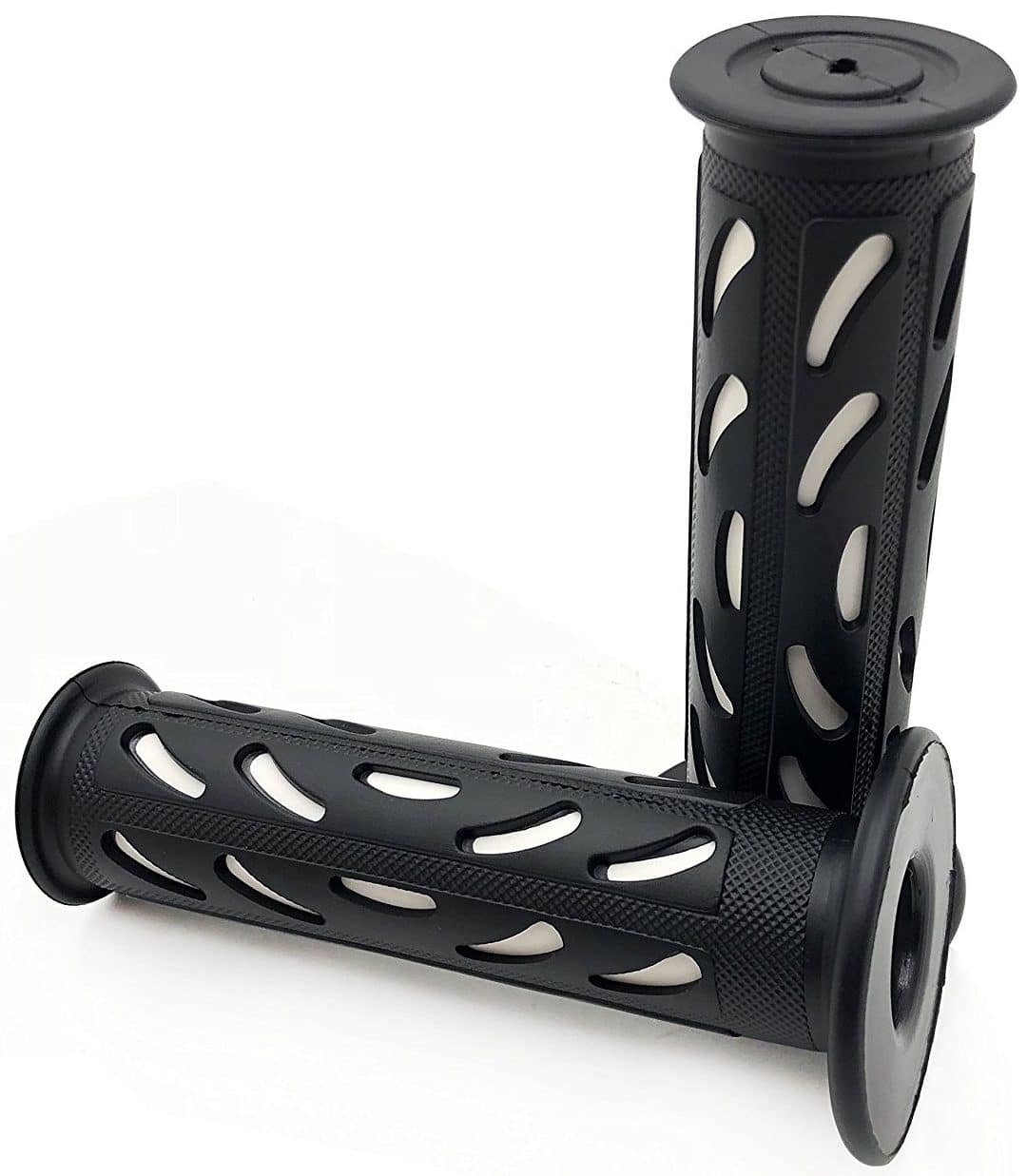 Similar to their waffle grips, the bean style grips by KTM Motorparts are made from a soft gel with an engraved pattern.

The difference between the bean style and waffle style ultimately comes down to preference. These particular jet ski grips don’t have finger contours on the ends, which may be a drawback for some people. However, they do come in solid black which makes them a great option as Yamaha, Kawasaki, or even Sea Doo handlebar grips.

The engraved texture is great for anyone who doesn’t prefer grips with protruding patterns. They grip well even when completely wet, and are one of the better low-key options available.

The OEM Yamaha waverunner handlebar grips are pretty basic in terms of the style and functionality. They’re traditional solid black rubber grips with “Yamaha” engraved on them.

Unlike with the name brand Seadoo handlebar grips, these are best suited for Yamaha waverunners. They could more than likely fit on other pwc, but the Yamaha branding across the center is a very noticeable detail.

This is a solid option for all the Yamaha owners out there who want to upgrade their grips. They’re an original Yamaha product, which is exactly why so many people prefer them.

Outerdo’s handlebar grips are an affordable option that come in a variety of colors. They’re made from soft skid-proof rubber to increase grip while also improving comfort.

These grips are actually made for bicycles, but they’re flexible enough to put on other types of handlebars as well. They have a pretty simple design, so they blend in well on most pwc.

One slight drawback of these grips is how tough it can be to put them on. The best way to get around that is by using a little bit of rubbing alcohol to slide them into place. Other than that, these are an excellent choice.

A Beginner’s Guide to Riding a Jet Ski