Check out the fastest PWCs on the market as we uncover the record-breaking top speeds that have been reached in recent times. 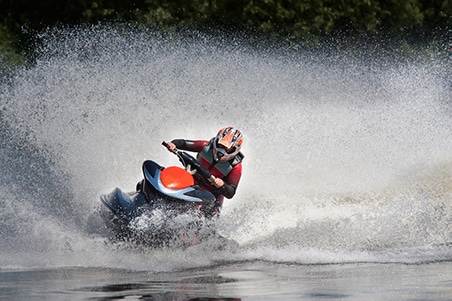 The world record for the fastest speed reached on a PWC is an incredible 127 mph!

This bone-shaking record was set in 2017 by Uva Perez.

The fastest Waverunner is clearly going to take some beating! So how about the fastest Seadoo?

Carlito del Valle is the owner of this record. He has taken his Seadoo to 118 mph. You can see it in action in the video below.

The title for the fastest stock jet ski is tied between several watercraft. Sea-Doo’s RXP-X, Kawasaki’s Ultra 310R, and Yamaha’s FZR all clock in around 67mph.

Depending on the rider’s weight, how many gallons of fuel are in the tank, and water conditions, speeds above 80mph can be obtained.

The title for “the fastest jet ski” changes constantly as teams continue to push for better results.

The reason stock jet ski’s in America all top out at 65mph is because as companies competed for the fastest jet ski on the market, the Coast Guard began to get concerned and intervened.

The regulation put in place allows jet skis to have a top speed of 65mph with a 2mph free rein, meaning technically a jet ski can hit 67mph straight from the manufacturer.

With a limit set on the top speed, jet ski companies began focusing on acceleration and stop time rather than ways to bend the rules.

An interesting thing to consider is that the Coast Guard used a 200-pound rider during their testing in brackish water with a full fuel tank. If the rider were much lighter, the tank only had a few gallons in it, and the water conditions were ideal, its more than likely the jet ski would have gone over 70mph.

Getting around the barriers set by the coast guard and the manufacturers can be done in many ways. 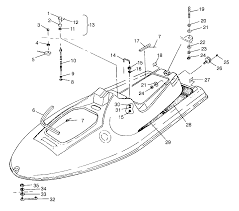 The first step is to find the right riding conditions to make your jet ski faster.

Sometimes watercraft are faster in freshwater because there is less drag than in saltwater (it’s less dense), but sometimes the altitude that comes with most freshwater makes engines lose a little bit of their strength.

Watercraft, including jet skis, sit higher in saltwater. The smaller surface area submerged can cancel out the friction caused by the denser water. It may take some days on the water before finding the location that works best for you PWC.

Choppy water isn’t the only weather condition that slows down jet skis. Days with high humidity or high air pressure can make engines work much harder than usual. Riding on a clear day with low humidity will generally make a jet ski faster.

Always remember to be well aware of your surroundings while riding. Maxing out the speed on a jet ski is very dangerous, and should only be done in a controlled environment. Search your local waterways to find a regulated place to ride before attempting to max out your jet ski’s speed. It can also be beneficial to have other riders nearby to alert you of any hazards. 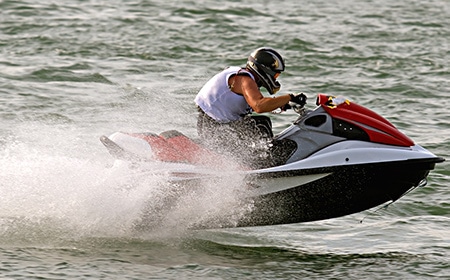 Eliminating weight by getting rid of unneeded things in storage compartments and riding with only a few gallons in the fuel tank will also allow a jet ski to top out at a higher speed than normal.

This may seem like common sense, but many riders don’t consider the extra weight to be as big of a factor in speed as it is. Getting your jet ski to go as fast as it can requires you to make it as light as you can.

Choosing a more hands on approach to making your jet skis faster can be difficult but is not impossible.

There are plenty of performance parts you can experiment with to increase your top speed. Things, like upgrading your intake grate or removing the engine’s GPS-controlled speed limit, will help you get the most out of your jet ski. Modding jet skis can become a fun hobby, especially for anyone with a need for speed.

Check out this post on how to make a jet ski faster for more in-depth information.

The truth about searching for the fastest jet ski

Anyone who has ever ridden on a performance jet ski knows that 65mph is more than enough speed for normal riders. Some people may even argue that 55mph is an ample amount of speed.

It doesn’t even take riding a performance PWC for someone to realize how fast 65mph on the water is. Most people who have ridden any kind of watercraft know how dangerous they can become at those high speeds.

Think about it like this, the speed limit on a highway is only 70 mph. Why does a watercraft that’s smaller and less stable than a car need to go that fast on water?

Finding the right jet ski for you

In reality, some people simply want to know what the fastest jet ski is out of curiosity, but that isn’t always the case. Many people who are searching for the fastest jet ski are serious buyers. For the latter of the two, the best option would be to shop around for high-performance jet skis.

The fastest jet ski in America doesn’t belong to any specific company. It’s good to keep in mind that most PWC brands have a model that reaches 65mph. Searching for the fastest jet ski shouldn’t be a buyer’s main priority. Instead, buyers should find the best jet ski that fits their needs.

What exactly does that mean?

Well, unless the only goal is to drag race out on the water, buyers should look for the fastest PWC that offers other features they want.

So much more goes into jet skis other than top speeds. Storage, fuel capacity, and maneuverability among others are important factors in making a choice.

Do you plan on having multiple riders? How much weight can your trailer hold? Going fast is fun, but being practical and having a comfortable ride is essential as well. The bells and whistles of a jet ski can really make or break a riding experience.

A review of the best jet ski can be found in a more detailed post here.

The fastest jet ski in America is going to have a stock speed of around 65mph, maybe 67mph at most. If you’re looking for something more than that, I’d suggest getting a passport.