Learn how a jet ski manages to speed through the water with such ease as we explain exactly what makes them tick. 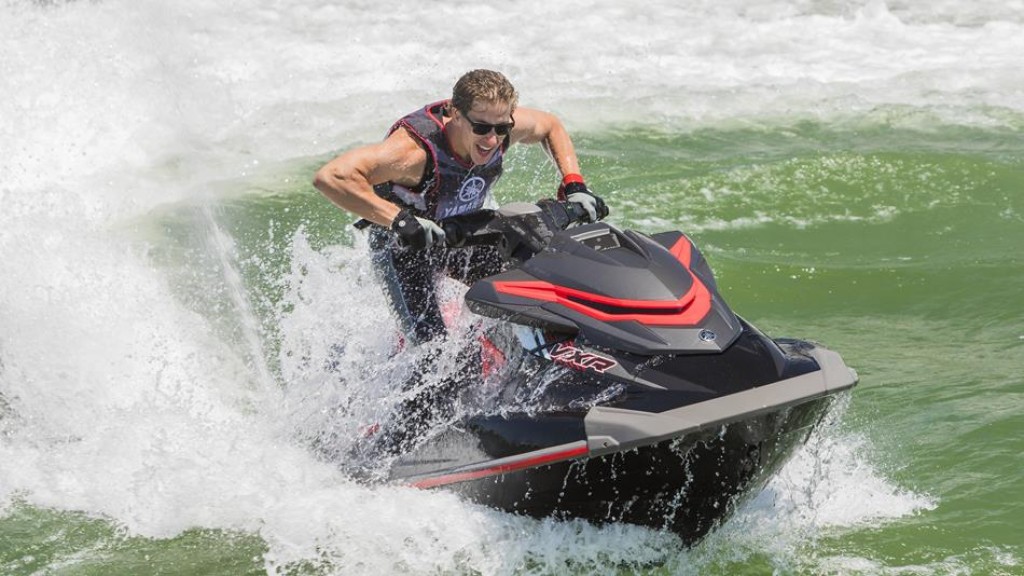 If you love spending time outside during the summer months when the sun’s rays shine right at you, then we would like to tell you that there is a way to upgrade your fun by several notches by getting a jet ski and going to a nearby lake.

You can get a cheap model of a jet ski for around $5,000, and knowing that even the slowest ones can reach 40 MPH, it should be more than enough to spend some exciting moments in the water.

However, when traversing the lakes or coasts, you might catch yourself thinking, “how do jet skis work?” Sure, it’s amazing that they allow you to have so much fun and achieve speeds that are nothing to sneeze at, but how do jet skis do that?

If you want to learn more about the functioning of a jet ski, then you are in the right place! In a moment, we’ll explain the science behind the personal watercraft’s propulsion and also why your jet ski needs an impeller.

How Does a Jet Ski Work?

If you’ve ever used personal watercraft, then you know that steering a jet ski isn’t difficult – all that you need to do is to turn the key and then use the handlebars to go in the direction that you’ve chosen as the most likely to provide you with unforgettable memories. Okay, but what causes a jet ski to move so fast, or really – move at all? If you suspect that it might have something to do with the stream of water that fires from the back of your jet ski, then you are correct.

Recommended: Learn all about jet ski storage next. 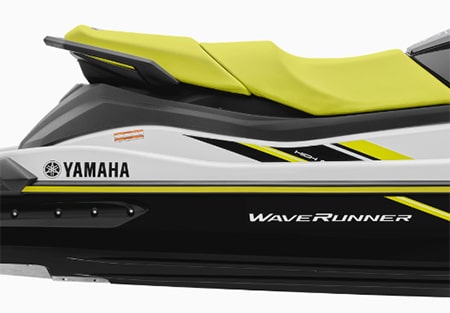 The water is pushed out of a personal watercraft, and as a result – the machine moves forward. It has to do with Newton’s third law. In short, every action results in an equal reaction in the opposite direction. Because of that, if the water gets fired out of a jet ski’s back with a lot of force, the PWC can achieve an impressive speed, though, given its weight – which is usually between 400 and 1000 pounds – it needs a powerful engine.

The Propulsion System of a Jet Ski

All right, so how does the propulsion system of a jet ski work? It’s possible thanks to a part called an impeller, which pumps the water inside thanks to the rotating blades. After the water gets sucked in, it gets blown out of the back of the jet ski, which creates a force that moves the machine forward.

At the same time, we must remember that the force that makes it possible for the PWC to move forward is equal to the force of the water that exits through the back. That’s why it’s not enough for the water to simply get thrown out of the back – it has to do so with a powerful force, or a boat wouldn’t move. To be more precise, the water gets launched through a nozzle that’s located at the back and of which diameter is smaller than that of the water intake. Because of that, the pressure of the water that gets thrown behind the craft is much stronger.

In a way, the propulsion system of a jet ski is somewhat similar to how rocket engines work, though in this case, the power required for a rocket to get in the air is many times larger. 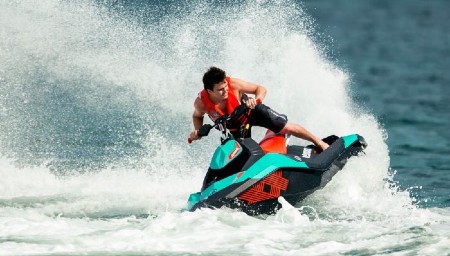 Jet skis usually come with engines that have between 60 and 310 HP, and the more powerful their engine, the higher speeds they can achieve. However, even with jet skis that have relatively weak engines, you’ll have no problem reaching 40 MPH, which, if you ask us, is not that bad at all!

Some jet ski owners decide to modify the engines in their machines or replace them with those from, e.g., motorcycles. However, although doing so might often bring a lot of benefits (read: more speed), we would advise you not to do that by yourself, but rather, let a professional handle the work. If the propulsion system of the jet ski malfunctions while you are riding 60 MPH, you might be in for a lot of trouble, even if you have a life jacket and helmet on.

Why Do Jet Skis Need Water Apart From Propulsion?

However, water is needed for much more than just allowing a PWC to go forward. Sure, without it, the propulsion system wouldn’t work, but apart from that, water also helps to cool down the engine and prevent it from overheating.

Because of that, if the impeller doesn’t work correctly, for example, because it becomes partially clogged, you will notice that your jet ski becomes incapable of reaching high speeds. At the same time, the stream of water fired from the back of your machine will become noticeably less impressive.

Apart from that, if less water gets sucked into your jet ski, your engine’s temperature will rise, which could potentially lead to a dangerous accident. That’s why you should check whether everything in your water jet works just fine.

The spray of the water has also yet another function – it helps to make your jet ski visible from a long distance so that another boat won’t hit it. You might think that the noise that a personal watercraft makes would be enough to attract the attention of anyone nearby, but unfortunately, some people fail to pay enough attention to the situation on the water or play loud music from a boat that makes it difficult to ascertain whether they are in any danger.

However, with the water being thrown 4 to 5 feet in the air, the chances of the other party reacting in a timely manner even when riding at astonishing speeds are higher.

Recommended: Discover the best places to jet ski in Florida

Now that you know more about the propulsion system of jet skis, you might realize that a malfunction could cause your ride across the waves to end rather suddenly. However, although jet ski accidents do happen, regular maintenance and following safety tips will help you minimize the risk of things going awry.

Still, that’s not all. Even if your personal watercraft works just fine, we still shouldn’t forget that human error is the most common cause of accidents. Because of that, you should remember to wear a life jacket and helmet if you want to have some fun in the water on your jet ski.

You might focus too much on the conversation with a passenger, the sun could momentarily blind you, or you could encounter another jet ski rider who would be far less responsible than you. It’s impossible to predict every bad thing that could happen, but the least we can do is to remember those basic safety rules. 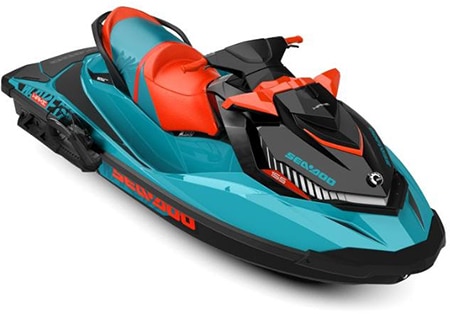 Last but not least, you shouldn’t get on your boat if you had drunk some alcohol beforehand, even if it was a minuscule amount. Alcohol is responsible for around 15% of accidents that involve jet skis, and it’s not hard to grasp why.

Apart from leading to lapses of judgment and overestimating your own abilities, it also impairs your motor function and reflexes. Because of that, you are more likely to hit another personal watercraft as you won’t be as focused on what’s in front of you. You might also misjudge the distance to another water vessel, with terrible consequences for everyone involved.

Recommended: Learn how to ride a stand-up jet ski next.

If you love summer and you love speed, then getting a jet ski is one of the best investments that you can make. Though the models that can reach 70 MPH can be really costly, for around $5,000, you can get one that will be able to reach 40 MPH, which might seem like not that much until you get in the water and feel the true power of this beast.

However, even if jet skiing sounds to you like a lot of fun, you might have some questions about the propulsion system of a personal watercraft, most notably “why does it even work?”

In short, the water that gets sucked in by an impeller is then launched from the nozzle located at the back of the craft. The larger the force at which the water is expelled, the larger the force that pushes the jet ski forward – Newton might have said a few words about it (though not necessarily about jet skis). We hope that after reading this article you’ll be even more amazed by the jet skis and that your experiences while riding those beasts will be even more incredible!