Looking for some fun inflatable pool toys? We recommend 5 awesome jet ski inflatables down below!

Having fun on a jet ski doesn’t require a lake, river, or beach. With these inflatable jet skis, your child (or maybe even you) can float around right in your backyard! They can be used just as pool toys, or anywhere there is calm water. 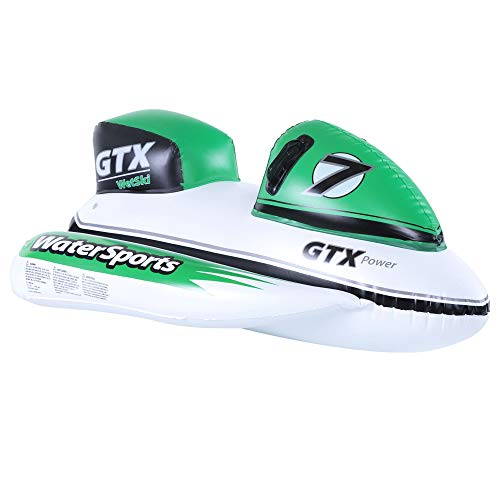 The GTX inflatable jet ski is really cool because it’s modeled after an actual PWC. The graphics on the side even resemble real jet ski graphics. Overall the design is stable so tipping over is a rare problem for most kids. A handle on each side of the jet ski provides extra support when getting on and off. The back of the seat is sturdy so most kids are comfortable floating around on it for long periods of time.

The Lasershark is an awesome choice. Putting a squirt gun on top of an inflatable jet ski has to be one of the best innovations when it comes to floating toys. It’s stability could be a little better so children who can’t swim well should be supervised in case it tips over. The recommended age by the manufacturer is 5-9 but weight and height are big factors as well.

Cons: Made from thin material 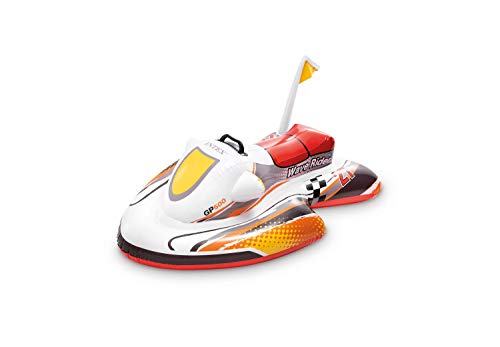 Almost all reviews of Intex’s wave rider are positive. This inflatable jet ski is intended for children ages 3+ but younger children should still be supervised while riding it in case it tips over. There is only one main handle on the center rather than two on the side. The design is pretty well balanced although some smaller children may fall off if they lean over too far.

It is intended for younger kids so it does not come with a motor.

Cons: Can be unstable for smaller children

One of the more sturdy options on the list is the H20GO inflatable jet ski. It has a really wide stance that even squirming children can balance on.

The inflatable is made from high-grade PVC material. Two heavy-duty handles are on the sides and a removable squirt gun sits in the center. It has an age rating of 3 and up, so older kids could use it as well. 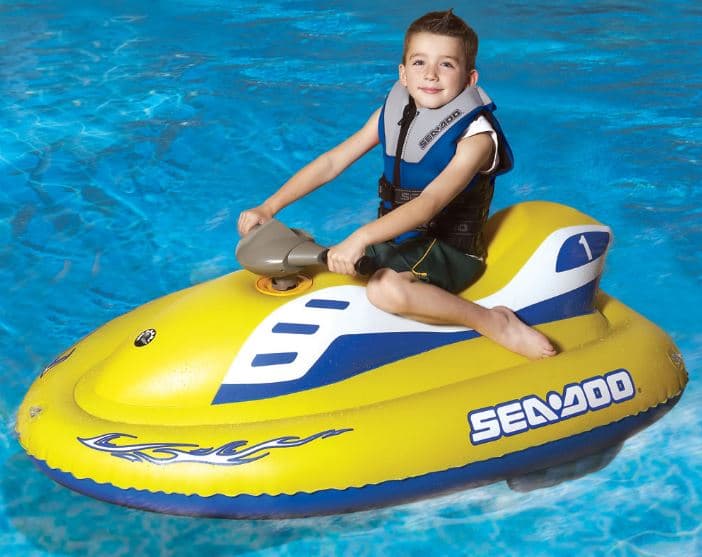 The coolest one on our list is this inflatable jet ski with a motor. It has an impellor that can cruise up to 2 mph. At the time of this writing, it costs $100, and can be bought here. Another good option is the Bonzai. 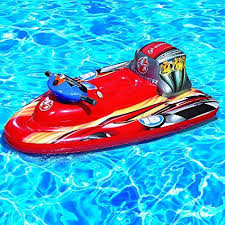 This is a toy most kids would go crazy for. It’s a motorized inflatable jet ski with a squirt gun on it. I think that’s about as cool as water toys get. It can hold up to 100 pounds and goes 2-3 mph. The back is somewhat wide so it’s pretty stable in the water. Overall the reviews are mixed. Bonzai makes one of the only inflatable jet skis with a motor so it’s worth checking out. This is definitely the toy all the kids will fight over during the summer.

Recommended: Don’t miss our guide to jet ski MPG next.

Things to remember when buying an inflatable jet ski

Do you own one of these or have one you want to recommend? We’d love to hear from you down below!

Best Jet Ski Shoes – What to Wear on a PWC