Suzuki Wet Bike: Are They Still Worth Buying?

Curious about the infamous Suzuki Wet Bike? We tell all in our guide to the epic PWC of the past.

When it was first released, the Wet Bike was without a doubt one of the craziest looking vessels on the water.

It gained a lot of initial attention for its looks and novelty, but somehow between now and then it has become all but forgotten about.

Despite being one of the first ever personal watercraft models, having multiple features in movies, and revolutionizing the PWC scene, the Wet Bike is just a vague memory for most people these days.

However, in today’s article, we aim to change all of that!

Learn all about this awesome piece of engineering that was way ahead of its time!

What is a Wet Bike? 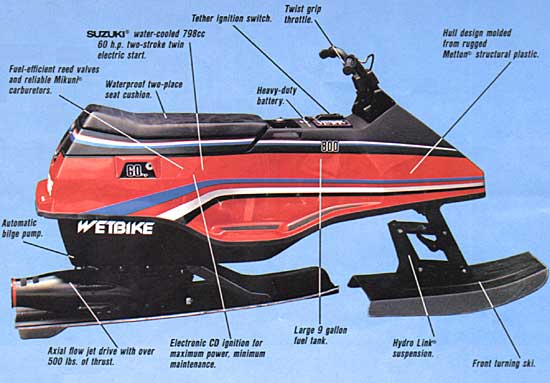 Unless you’ve been in the personal watercraft scene for a few decades, you might not know what a Wet Bike is.

As the name suggests, it was essentially a motorcycle (or a bike) for the water. It was one of the original personal watercraft models to hit the market, but unlike models from Kawasaki, Sea-Doo, and Yamaha, it never really caught on.

Rather than steering by changing the angle of the rear jet, the Wet Bike used traditional handlebars with two front skis to change direction.

This took the term “jet ski” to a whole new level. The result of this concept was an oddly shaped snowmobile for the water.

Since the Wet Bike was only in production was from the late ’70s to the early ’90s, it has a distinct look to match.

Most of the body styles have a lot of triangles and rectangles, with sharp lines and bright colors tying everything together.

The Suzuki Wet Bike arrived on the scene with a bang in 1978, a long time before PWCs would be seen on waterways everywhere.

After being in production for a little over a decade, the Wet Bike eventually stopped being manufactured in 1992.

Because of the unique look of the Wet Bike, it landed roles in several well-known movies. It can be spotted in “James Bond: The Spy Who Loved Me“, “Police Academy 3: Back in Training“, and even “Red Surf” (we’ve got more on these movie appearances a bit later!).

Rather confusingly, it wasn’t actually made by Suzuki but Spirit Marine, who were a subsidiary of Arctic Enterprises (before moving on to other brands like Tigershark, the Wet Bike was their front-runner). The name Suzuki came from the engine, buried beneath the seat.

The technical description for the Suzuki Wet Bike is a planing water motorcycle, a design that fuses the jet ski and a motorcycle. A two-stroke engine provided the power but on the original model, riders would need a phenomenal balance to stay on board.

It was originally marketed as the “Wetbike Watercycle” and it was commended for the superior level of workmanship that went into the manufacture. Unlike many other types of craft where performance can be negatively influenced by more weight, the Wet Bike thrived under pressure.

Reviews from the 1970s revealed that riding the wet bike with a passenger actually improved the performance because it reduced cavitation and heightened suction.

The quality of the Wet Bike was clear in the finishing touches that had been applied. Everything from the heavy leather seating to the mold work and decals were precise, defined and high-class. 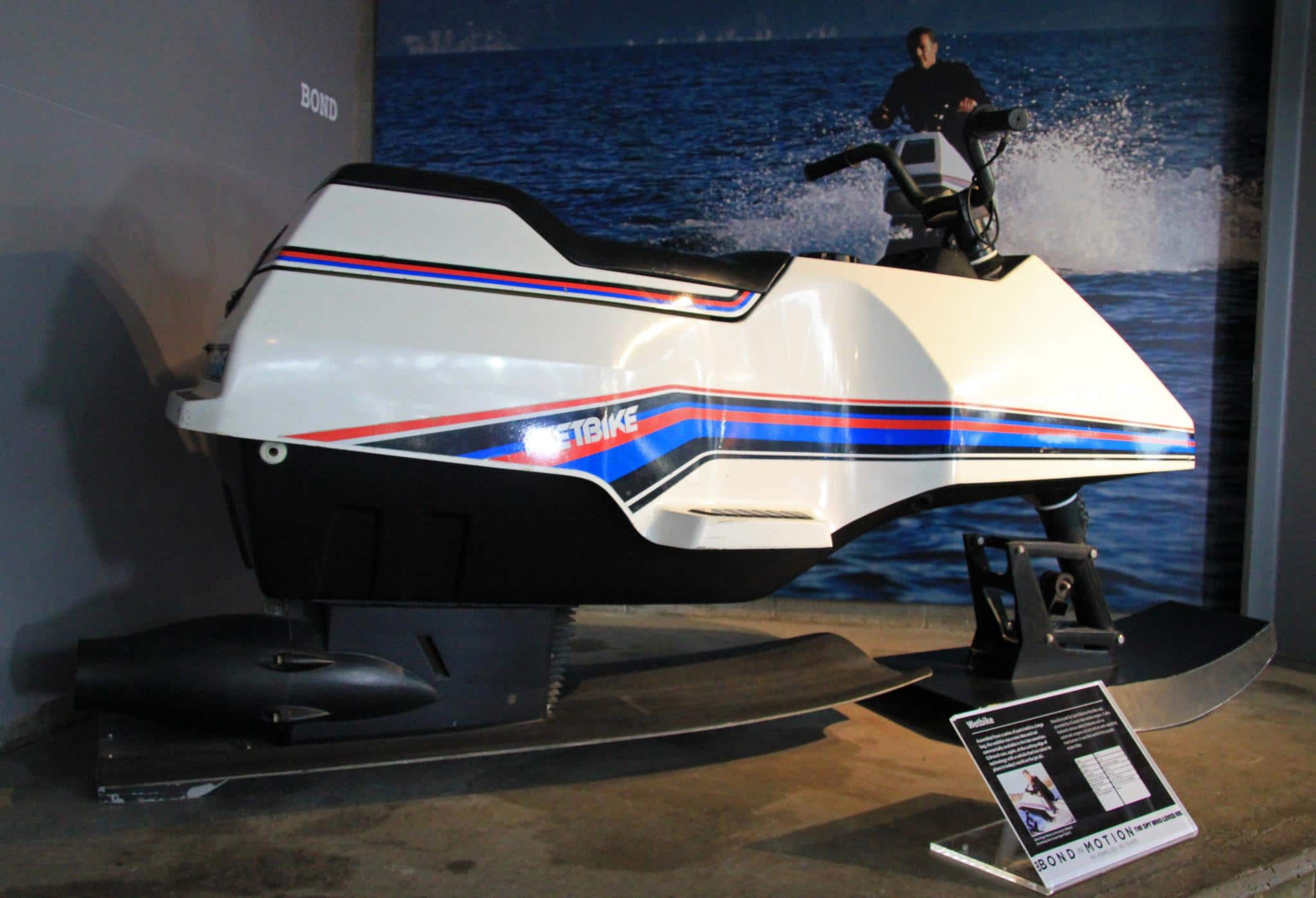 The Wet Bike went on to become one of the biggest sellers for Arctic Enterprises (who later rebranded to Arctic Cat). Wet Bikes continued to be made, with tweaks made to the engine and overall weight.

However, by 1992 the Wet Bike had run its course and was finally discontinued. A new generation of PWCs had arrived that were easier to ride and more efficient all-round, such as the WaveRunner from Yamaha.

There are several reasons it didn’t last, one of the main ones being that it was a little harder to ride than other jet skis. This, of course, was due to the signature skis that made it what it was.

But, even if they did somehow make it easier to ride, there were other obstacles standing in its way.

The overall design made it difficult to keep up with the performance of other models. it didn’t handle all that well and got jittery at higher speeds. In retrospect, it’s easy to see why it just couldn’t last.

Despite being out of production for almost three decades, the Suzuki Wet Bike still has whole fancies dedicated to its unique design.

Pre-owned Wet Bikes are quickly snapped up when they’re put up for sale and YouTube is full of videos of fans showing off their machines. 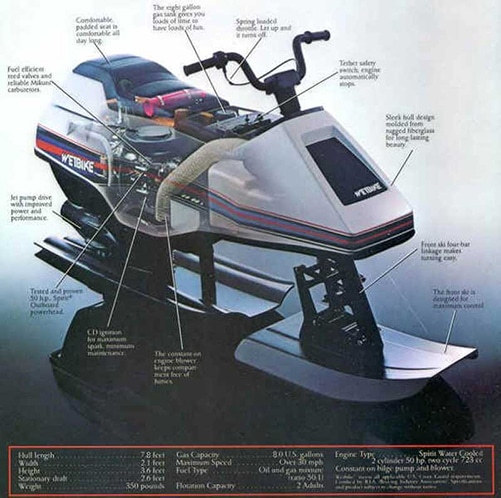 Depending on what year it was made, the typical Wet Bike top speed is 32 mph-36 mph.

It usually needs to be going 10 mph-15 mph to rise up on the skis, but that varies depending on water conditions and rider weight.

This might not seem like much, but at the time, it was more than impressive. Even now, it’s pretty amazing that such an odd-looking jet ski could reach those speeds.

Just like with the top speed, the engine specs vary according to the year and model. At its peak, the Wet Bike was using a 798cc, 60 HP Suzuki marine engine. It had a two-stroke twin electric start, an automatic bilge pump, and a jet pump with 500 lbs of thrust.

Regardless of the model, the seat on it is very narrow and rectangular. Although this matches the design well, it isn’t the most comfortable on long-distance rides.

However, the thin body allows riders to lock in easily when riding. This helps make leaning into turns a bit more intuitive than if the body was wider.

Just above the seat is a large 9-gallon gas tank, which lasts quite a while when filled all the way. At first, the Wet Bike’s top speed of 36 mph might seem like a drawback, but this greatly helps its fuel efficiency. Since it can’t reach very extreme speeds, it’s much less likely to burn through fuel quickly.

Overall the Wet Bike has some really cool things to offer. All of these features may seem mundane now, but at the time, this was all top of the line stuff.

The Wet Bike was described as a motorcycle that ran on the water, and in many ways this was true. It didn’t have a huge amount in common with PWCs and had a design that was far more akin to the wheeled machine from dry land.

To start with, there were no boat hulls on the Wet Bike; this was one of the factors which made it so hard to balance on.

Instead, there were hydrofoils which the Wet Bike sat on in the front and back. Riders would need to be able to distribute their weight perfectly, centering themselves in the middle of the seat. Any slight shift in the wrong direction would see them tumbling into the water!

Pump jets were used, just like a jet ski, but uniquely, the Wet Bike steered from the front, not the back like the others. This meant it really did handle like a motorcycle in the water, with riders needing to lean into each turn and moving the front hydrofoil just like a wheel.

The craft sat low in the water until it reached a speed of around 11mph. At this point, it would bounce up and veritably skim across the surface of the water like a pebble across a lake. The one disadvantage of the Wet Bike is that it needed considerably deeper water to get started than many comparable models.

This bumped up the top speeds to around 36mph, up from the 32mph the earlier models had been capable of. The lighter weight bodies which were introduced in later models also boosted the performance.

There were two specs for the Suzuki Wet Bike: the Silver Streak and the Tomcat. The latter was the sportier model of the two and had paintwork that was created to look like the F-14 fighter jet, also called the Tomcat.

It’s hard to appreciate just what a big impression the Suzuki Wet Bike made during its day, but there really was nothing else quite like it.

Its innovative styling and design meant that it was chosen to feature on TV and in the movies on a number of occasions.

Eagle-eyed viewers can spot the very first appearance of the Wet Bike in the chase scenes near the end of The Spy Who Loved Me.

The Wet Bike is ridden by Bond himself, with the super-spy describing it as one of Q’s gadgets. This was actually the prototype for the Wet Bike, before the commercial models hit the market.

The Wet Bike next popped up on screen in cult cop classic, CHiPS. In the 1982 episode “Overload”, Ponch and Jon jump on a couple of Wet Bikes to catch the bad guys who are escaping in a motorboat.

Over the years, Wet Bikes continued to be featured in movies and TV shows. These included Police Academy 3 (when a whole group of Wet Bikes and Kawasaki stand-up jet skis were used for a chase scene), Red Surf (the 1990 George Clooney film) and the 1983 comedy spy movie Go For It!

Despite its short life span, the Wet Bike really made a splash in the PWC industry. It inspired modern innovations like plastic hulls, tether style ignition, and intelligent suspension.

Of course these changes most likely would have happened eventually, but it almost surely would have taken longer had the Wet Bike not cleared the way.

Looking back, it’s easy to see why it didn’t make it, but it’s a shame that nothing ever really took its place. The out of the box thinking behind something like the Wet Bike is what pushes boundaries, as well as progress.

When the Wet Bike production was brought to an end, it almost marked the end of an era. Soon after many of the top PWC manufacturers tightened their belts as sales dipped across the board. It just so happened that the Wet Bike was the first to go.

Related: Is it still worth it to buy a Honda Jet Ski?

Believe it or not, there is still a decent sized market for Wet Bikes. They’ve become somewhat of a cult classic within the PWC community, and that helps maintain a demand.

It’s not hard to find a Wet Bike for sale, but finding one that runs might be a challenge.

Whether or not it’s worth it to buy one is really dependent on the person. They’re a novelty from the past that a lot of people see worth it. The problem is even the newest models are over 20 years old.

To make matters worse, it may be difficult to find any needed replacement parts. Despite that, there are a number of people who still pick them up as side projects.

Typically a Wet Bike for sale costs between $1,200 and $5,000. The price largely depends on condition, year, and location. Remember to leave room in the budget for repairs, because it will more than likely need some.

Aside from requiring more maintenance, buying a Wet Bike can still be well worth it to some. There is nothing else like it, and the ride is truly unique. It can be a great weekend project, as long as you have the time and patience for it.